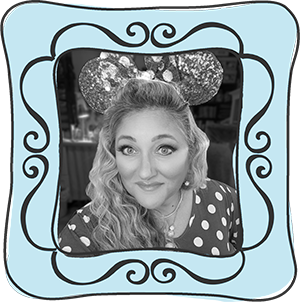 I’m Nancy, owner and founder of Disney Creative Co. I’ve been an artist from the first time I opened a box of new Crayola crayons and felt it calling me home to a world of my own creation. It’s been over 40 years of discovering the power of art in my own life, its ability to lift my soul and fill my heart with joy.

A day does not go by that I am not either creating some form or art and/or craft, writing about it, or teaching it in the hopes that I can encourage others to find joy through their own creative process.

I’ve authored and contributed to a variety of books and magazines featuring various arts and crafts mediums. I’ve enjoyed working as a creative designer for a wide variety of manufacturers over the years such as EK Success, American Crafts, Basic Grey, KaiserCraft, Graphic 45, Sticker Studio, Fibers By The Yard, Inque Boutique, Krylon Paints, Tara Materials, Delta Creative, Fredrix Artist Canvas, Chatterbox and have been a featured instructor at numerous events across The United States as a Designer/Certified Demonstrator for the paper crafts industry. My favorite color is glitter!

I also have an Etsy shop- Scraps & Ink Crafts– where I offer unique and exclusive Disney-inspired craft supplies.

When I am not in my studio/office, I am hiking the beautiful mountains of my native Idaho or traveling to warmer climates- usually Florida- to visit Walt Disney World.

My greatest joy has been being married to my very own Prince Charming for 28 years and raising two amazing, talented daughters who are my best friends and most enthusiastic cheerleaders. We are Disney Vacation Club members and Walt Disney World is literally our second home! The magic of Disney has always been at the heart of our favorite family memories.

Disney Creative Co. is the culmination of years of searching for a renewed purpose after my battle with Cancer and re-evaluating what is important in my life. I am truly blessed to be surrounded by people who care about and strive to bring joy and encouragement to others. With their boundless love and support, I am excited to create and share a magical space where ALL are welcome!

What is your favorite Disney movie and why?

Most difficult question anyone could ever ask me! The first movie I ever saw in a theater as a child-Sleeping Beauty. The highly stylized art was, and still is, just stunning. And I loved Coco! Any movie that was so meticulously made in order to accurately represent a culture and is THAT visually spectacular wins my vote. Not to mention it has Dante the dog – he’s such a good boy!

Who is your favorite Disney character and why?

When was the last time you were at a Disney Park?

January 2021 with my partner in crime and friend – Kristin, of course!

What is your favorite ride/attraction at any Disney Park and why?

Hands down- Expedition Everest in Animal Kingdom. The queue is soooo elaborate and detailed! It’s such an immersive experience with the story unfolding as you move through the queue and then the ride itself with the negative G’s looping backwards-just takes my breath away no matter how many times I ride it. Beware the Yeti!

Do you have a favorite restaurant or quick service location at a Disney Park?

Are you a fan of the Disney Princesses? If so, which one and why?

Mulan. She’s not afraid to break through the stereotypes and step into a man’s world to kick ass when she needs to protect her family.

Do you have any Disney collections? If so, what do you collect?

Do you decorate with Disney during the holidays?

Oh yes! One room (the Disney room) gets a dedicated tree and other Disney décor at Christmas. For Halloween, I have a black tree with Haunted Mansion, NBC and Disney Halloween ornaments and other décor.

How often do you go to a Disney Park?

About 2-3x year. We start to plan the next trip on the plane ride home!

Rope drop or not?

Rarely! I don’t like getting up early, especially when I’m on vacation. The kids and hubs will go for rope drop and I’ll meet up with them later.

Do you have a favorite night-time show?

LOVE the Animal Kingdom tree at night with the magical projections. I’ll sit and watch it for a solid hour waiting to catch all the animals moving!

Do you have a tradition when you are at a Disney Park (the “must-do” list)?

When I go with my hubs, we HAVE TO go to Magic Kingdom on the very last day. He likes to end each Disney trip with the place he feels the most “magic”.

What is your favorite land and why?

Galaxy’s Edge in Hollywood Studios. It feels like you’re in the Star Wars movies!

Do you hunt for hidden Mickey’s?

Yup! I found a few new ones years ago in Walt Disney World and am listed in the credits in the books by “The Hidden Mickey Guy” himself-Steven M. Barrett.

Do you have a favorite time of year to go to a Disney Park?

We like to go in either February/March for Flower & Garden or November/early December to catch the tail end of Food & Wine in EPCOT, and sometimes get to see Christmas décor if they happen to decorate early.

How old were you the first time you went to a Disney Park and what is your first memory?

3 years old. It is also my first memory ever. We were in Disneyland on Main Street and I remember Eeyore falling off a mailbox that he kept trying to sit on. Everyone else was laughing at him and that upset me very much, so I started to cry. He came over and gave me a hug.

Have you ever made a copy-cat Disney food item at home?

Do Mickey-shaped pancakes count? I can also make a near-identical “Pina Co-Lava” cocktail that they serve poolside at both Beach Club Resort and Animal Kingdom Lodge.

Do you have any pets named after a Disney character?

My cat’s name is Milo. Same name as the main character in Disney’s “Atlantis”, but he’s really named after the road I grew up on-Milo Road. And my dog’s name is Ellie-the name of the character in “Up!” Also, not on purpose but a happy coincidence!

What is your ideal Disney Park day?

We did the “Ultimate Day of Thrills VIP Tour” in 2015, and that was a pretty good day. I’d like to do that again someday!