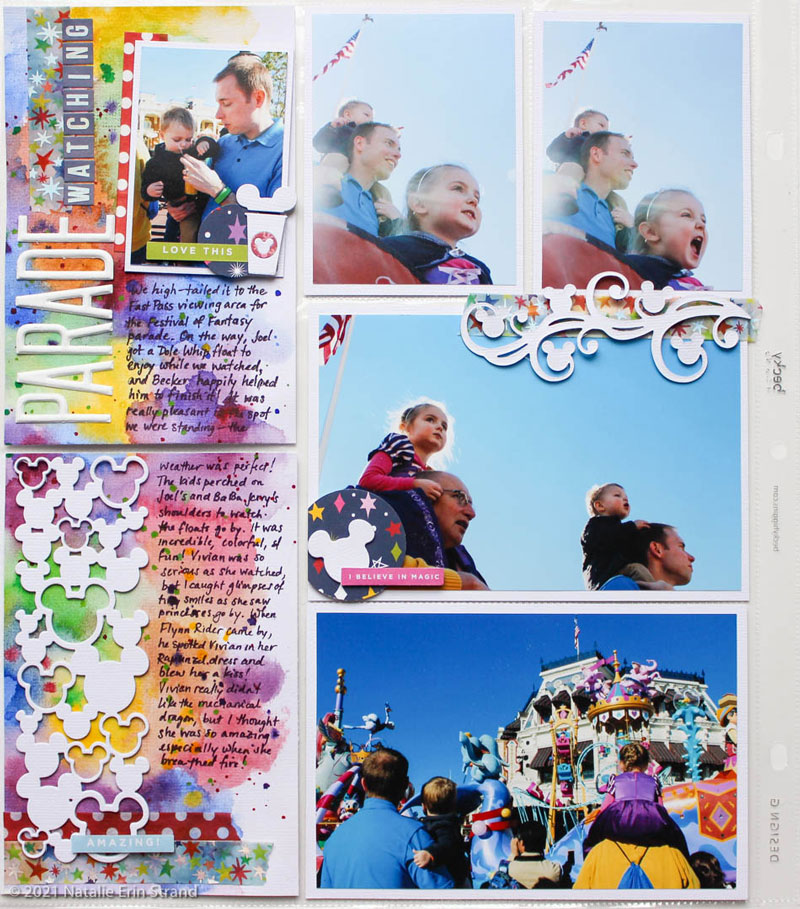 I was happy to be asked to help celebrate the launch of the new website-Disney Creative Co.-by making a scrapbook layout. When I received the product that I’d be working with, I was intrigued to use the dies. Until a couple weeks ago, I didn’t own a manual die cutting machine. A neighbor handed hers down to me, so this is the first time I’ve used manual dies for a layout! I immediately thought to make this parade watching page in my Disney 2016 album. Believe it or not, this parade was the only time we saw Mickey Mouse on this trip! I have no idea how we managed that, but I wanted to give a little nod to that fact by using as many Mickey motifs as I could. 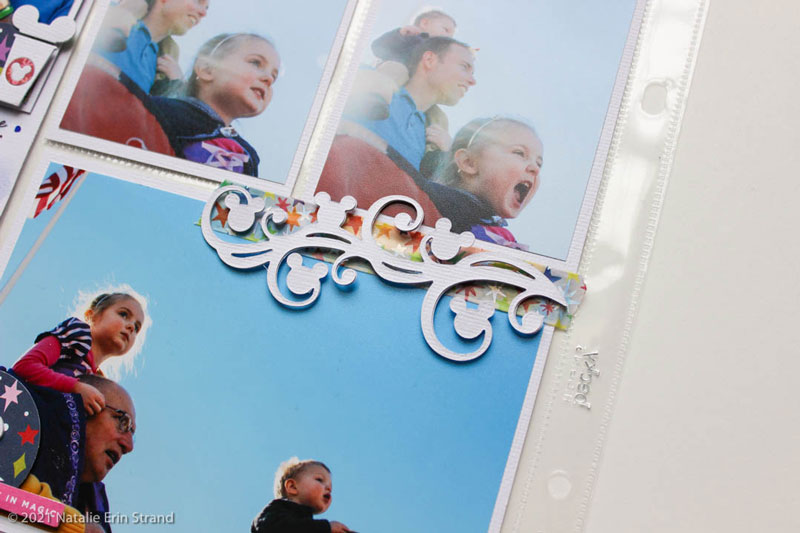 This layout faces my Festival of Fantasy layout; in order to coordinate the two, I used the same white textured cardstock with my dies as I used for the frames on that layout. 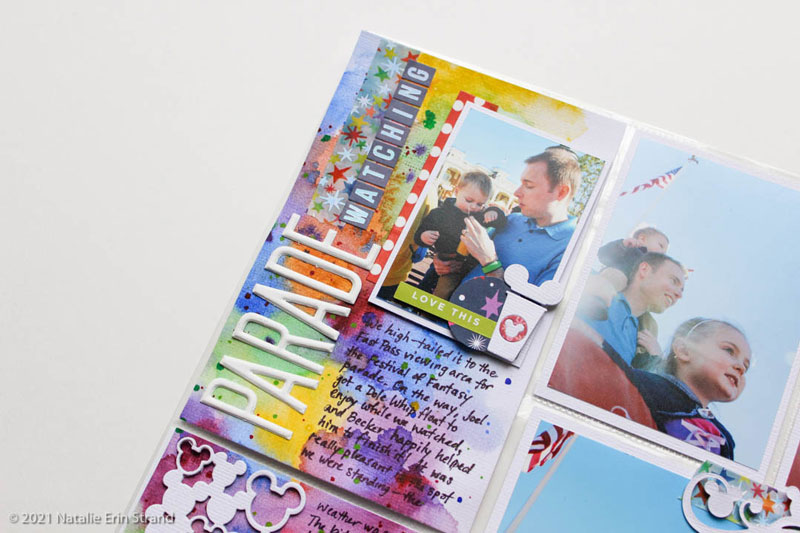 In the vertical pockets along the left edge, I created a matching watercolor background using the same paint colors as the facing page. The title is composed of some Thickers that I painted white (they were originally slightly grey and weren’t standing out from the background enough) and the letter tiles from the Shimelle Sparkle City sticker folder. In order to help my title stand out, I added a strip of the starry washi tape from Scraps & Ink Crafts–I love those silvery stars! 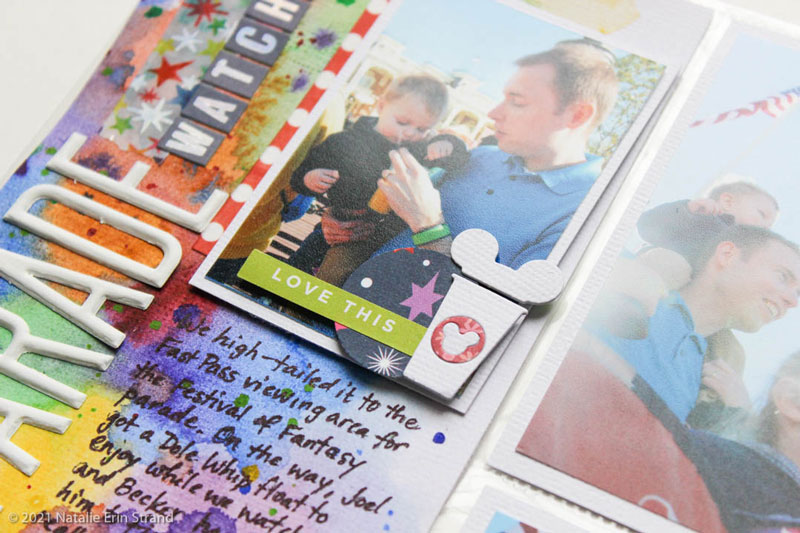 Before the parade, Husband enjoyed a Dole Whip float (and shared it with our little boy), so I just had to use one of the adorable “Mini Snacks” dies as a perfect accent to the photo! Behind the photo I layered a strip of the red/white polka dot washi tape to add a bit of emphasis.

In the lower pocket, I used the “Mouse Border” die to create a Mickey feature along the left edge. I wanted to give the die cuts a bit more dimension, and because the re so delightfully delicate, I decided to layer 3 or 4 cuts together rather than try to ad foam adhesive. I love the effect! 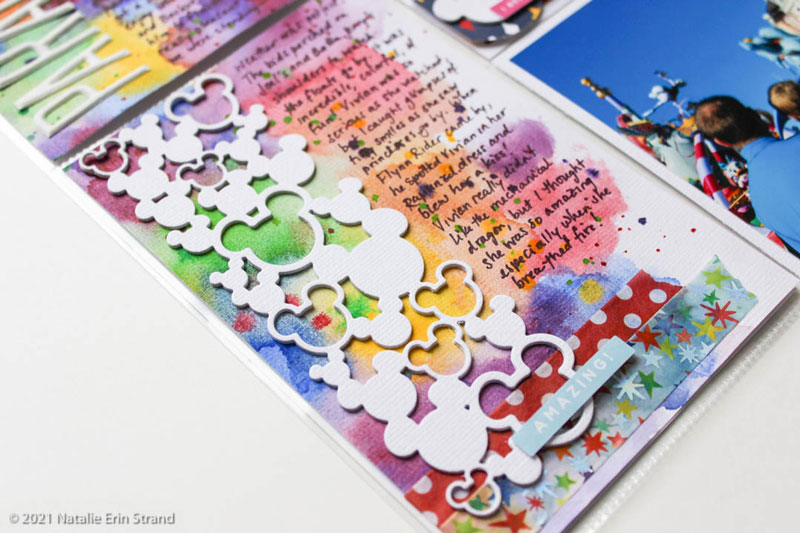 At the base of the pocket, I layered some more washi tape and a phrase sticker to anchor the border. 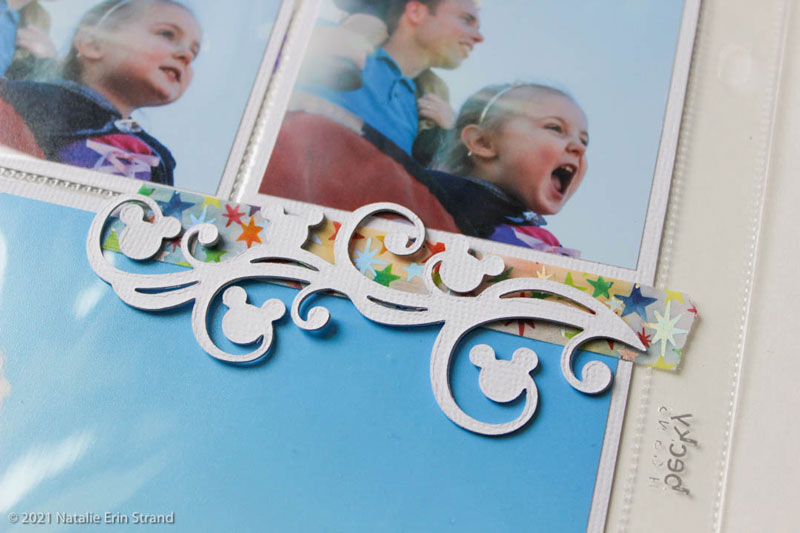 Not only does using multiple layers give the die cut more dimension, it also strengthens it since it is on the outside of the pocket. I added another strip of the starry washi tape to visually anchor the embellishment. 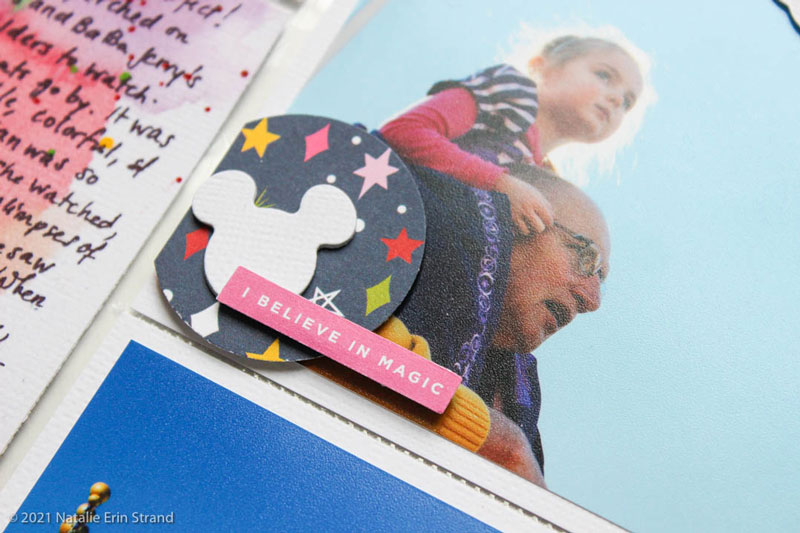 Last but not least, I added one of the cutout Mickey heads from the “Mouse Border” die cut to a punched circle with a phrase sticker for a tiny corner embellishment to my middle photo.

Nancy is the owner of Disney Creative Co. and Scraps & Ink Crafts. She visits Walt Disney World several times per year with family and friends where she finds endless inspiration for all her crafty endeavors. She's been known to run with scissors and colors outside the lines. Her favorite color is glitter.
Page load link