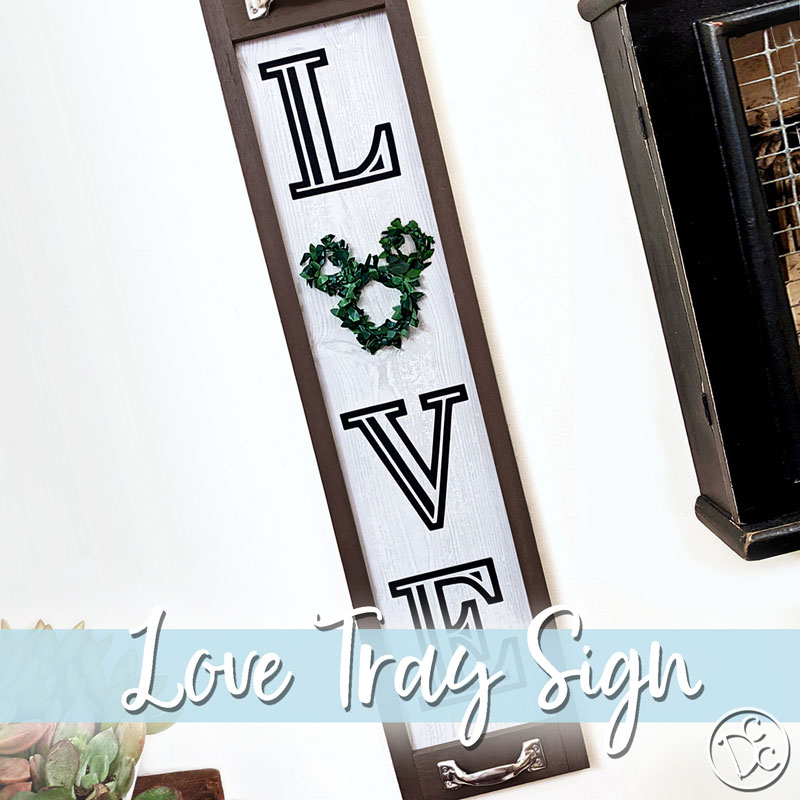 I gave this thrift store find a little makeover to include a subtle nod to Disney and learned an important lesson on perseverance along the way. 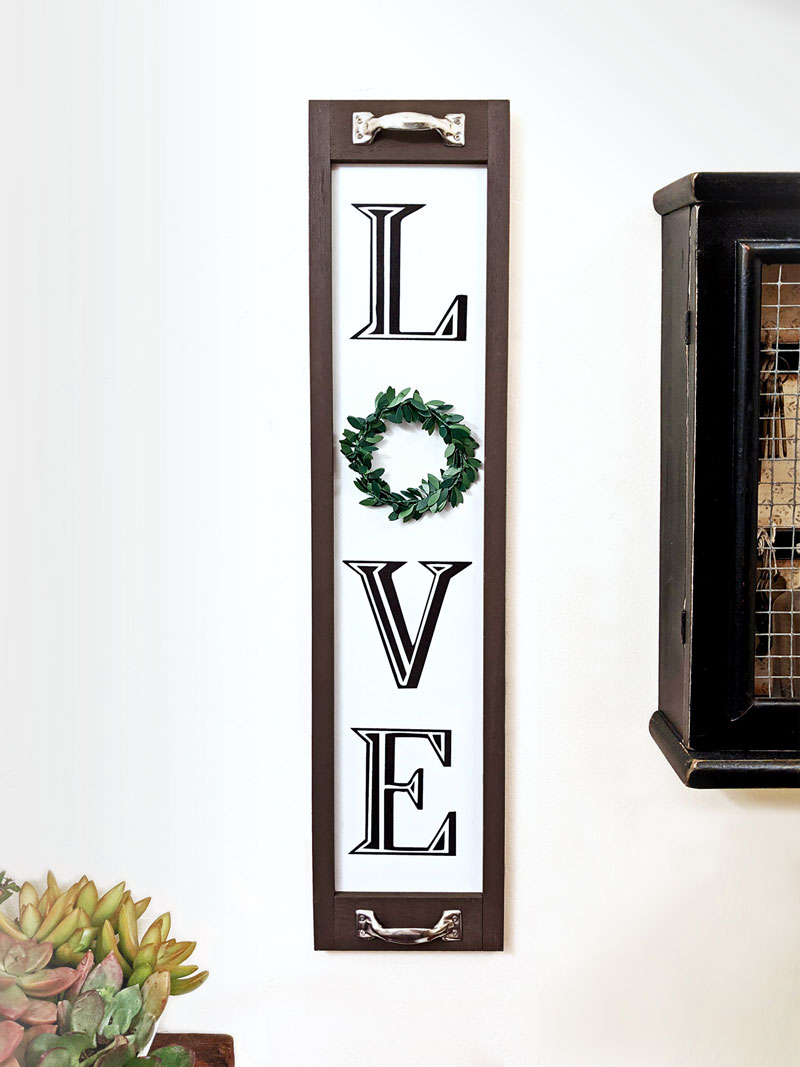 I was elated when I found this wall sign that looked like a little handled tray at a thrift store with a price tag of only $2. ONLY $2! I snatched it up and headed home with my new treasure-my head swimming with possibilities! Although this sign was in great shape “as-is”, I automatically envisioned the letter “O” in the word “LOVE” becoming a classic Mickey shape. I also happened to have the same mini garland used to make the wreath, so replacing it with something similar would be easy…or so I thought. 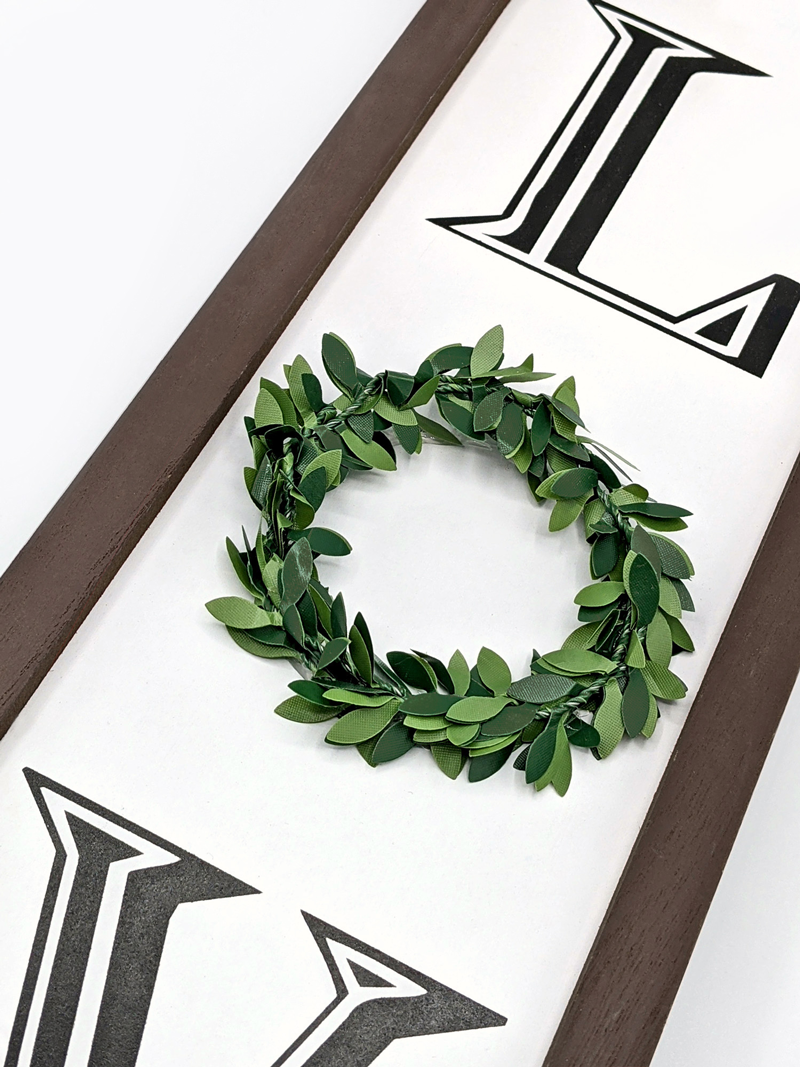 Upon inspection, it seemed fairly straightforward to remove the little wire wreath simply by prying it off the sign. 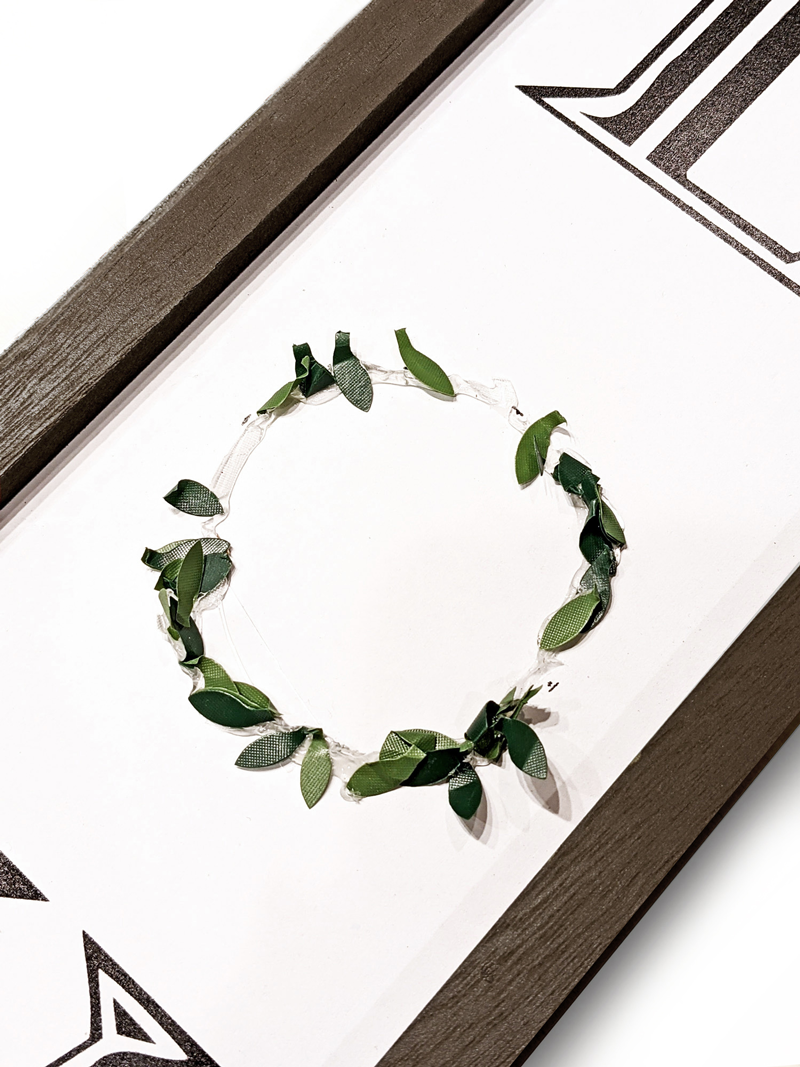 Okay, the wreath came off easily, and it looked as if there were just a few little bits of glue remaining that needed to be removed. Easy peasy….right? 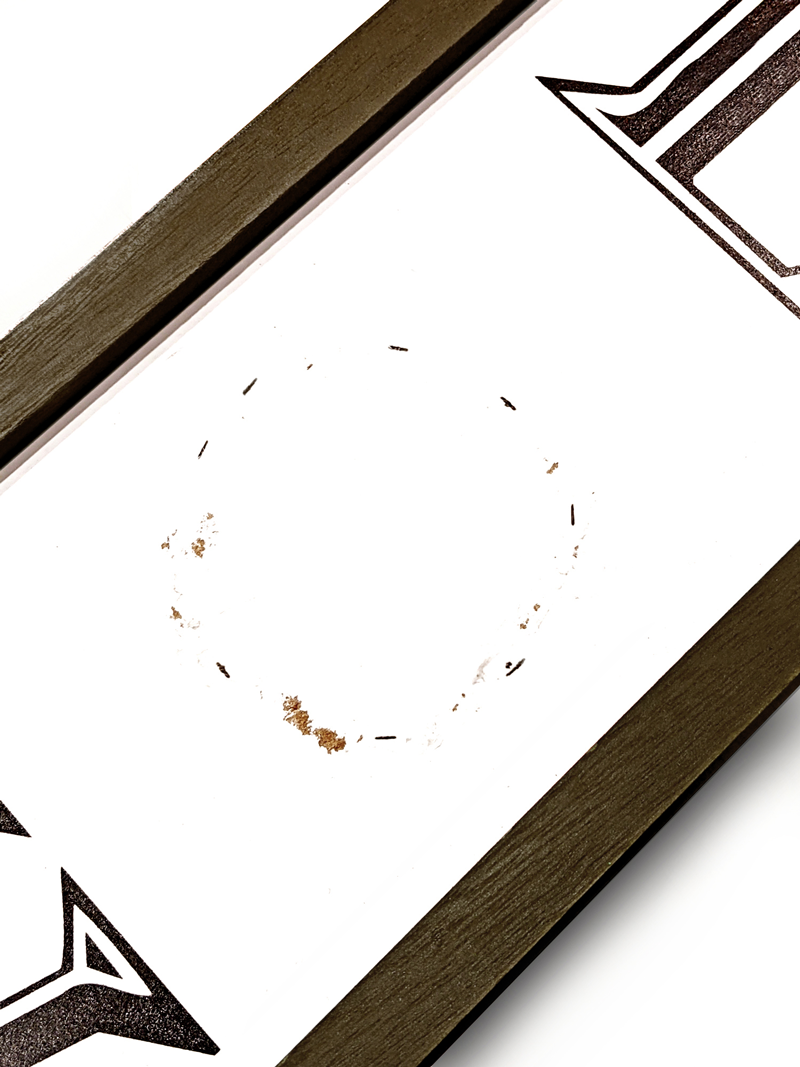 After I pulled off the remaining bits of glue, I was left with unsightly manufacturer marks on the sign itself that were NOT going to come off! The placement of my new Mickey wreath would leave these marks visible, and I really didn’t want that. So, trying to stay optimistic, I thought that a coat of paint and new letters would easily fix it. I was hoping to keep the backer board with the original letters visible, but now that it needed to be repainted, I would opt to use my Silhouette Cameo 3 to make new vinyl letters, rather than trying to hand-draw new ones after the paint dried. I just needed to pop the board out of the frame for painting… 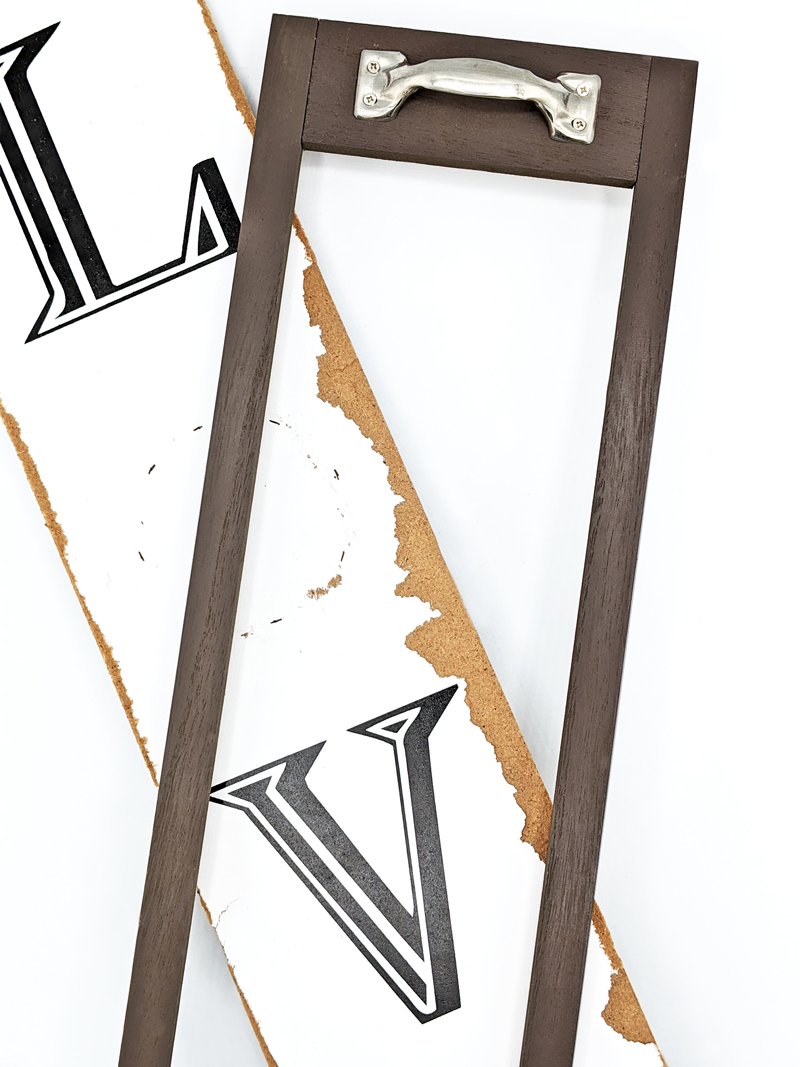 Ooops! As I was prying the board out of the back of the frame, it split and tore part of the board off, leaving quite a mangled and broken mess around all the edges of the board. Painting over this was now out of the question because the texture of the broken board would be visible through the paint.

Hmmm… What to do? I could just flip the board over and paint the back instead and use that as my sign front. No worries, right? Flipping the board over revealed a set of manufacturer and store stickers that were not coming off without a fight. 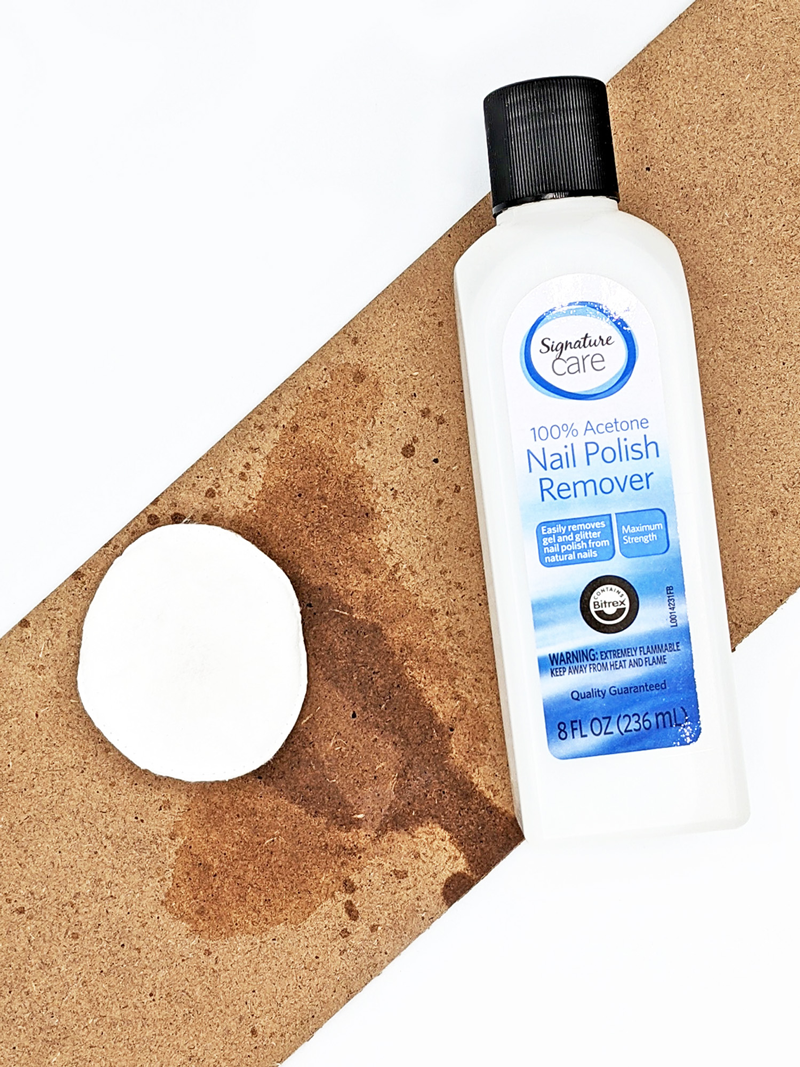 In my haste to deal with this latest setback, I went for the nail polish remover to loosen the glue and grabbed the 100% acetone instead of the NON-acetone version. Things quickly went from bad to worse as the acetone immediately began to eat away at the board, turn the area to a swollen blob of warped, mushy pressboard! 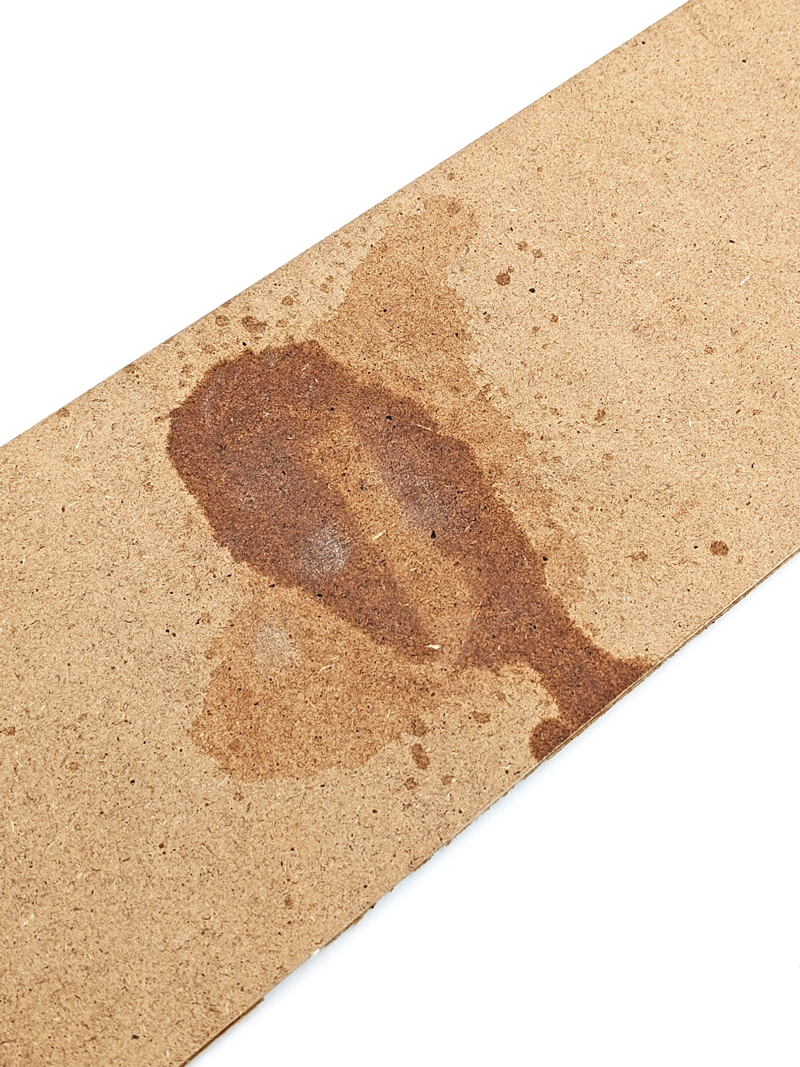 I wiped off as much as I could, but now had a new problem-a board with a badly warped area that would look terrible even with a new coat of paint. My $2 thrift store sign and “easy peasy” afternoon re-do was turning out to be an expensive and time-consuming challenge.

Time to cut my losses and find a new hobby! 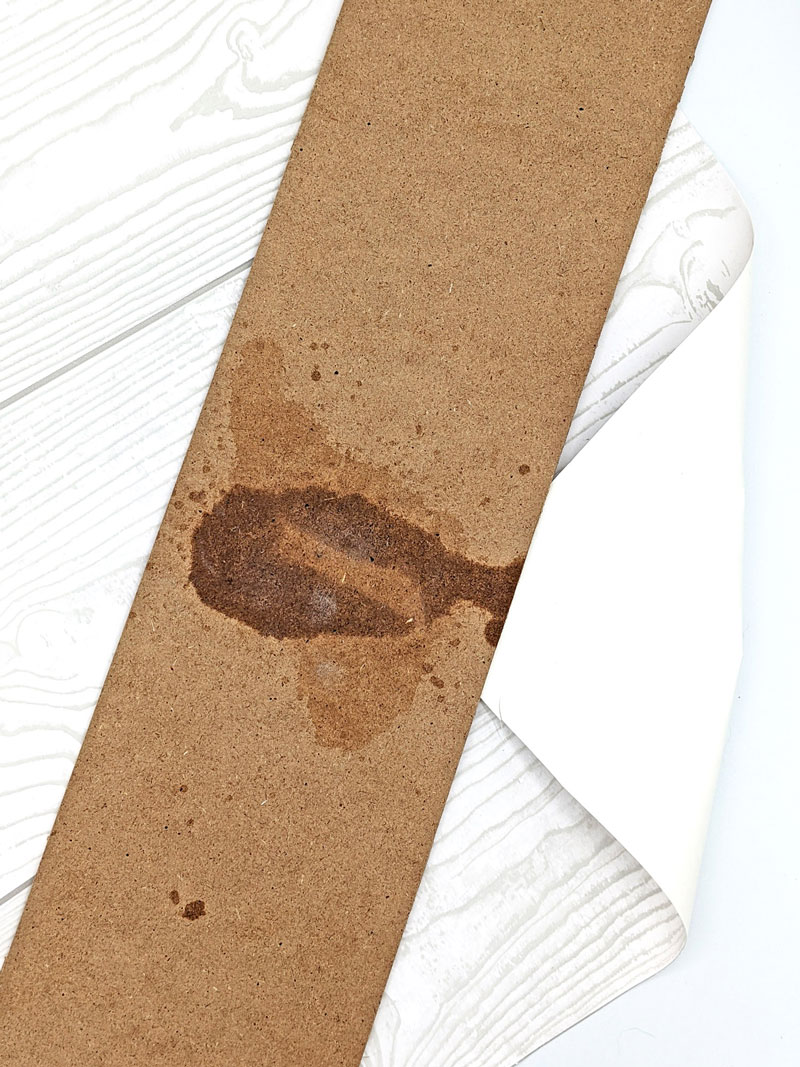 Just as I was about to toss the whole thing in the trash and Google the “How- To’s” of basket weaving, I remembered a roll of faux shiplap-looking wallpaper I had been using as a backdrop for staging photos. But would I be lucky enough for it to be the right size? 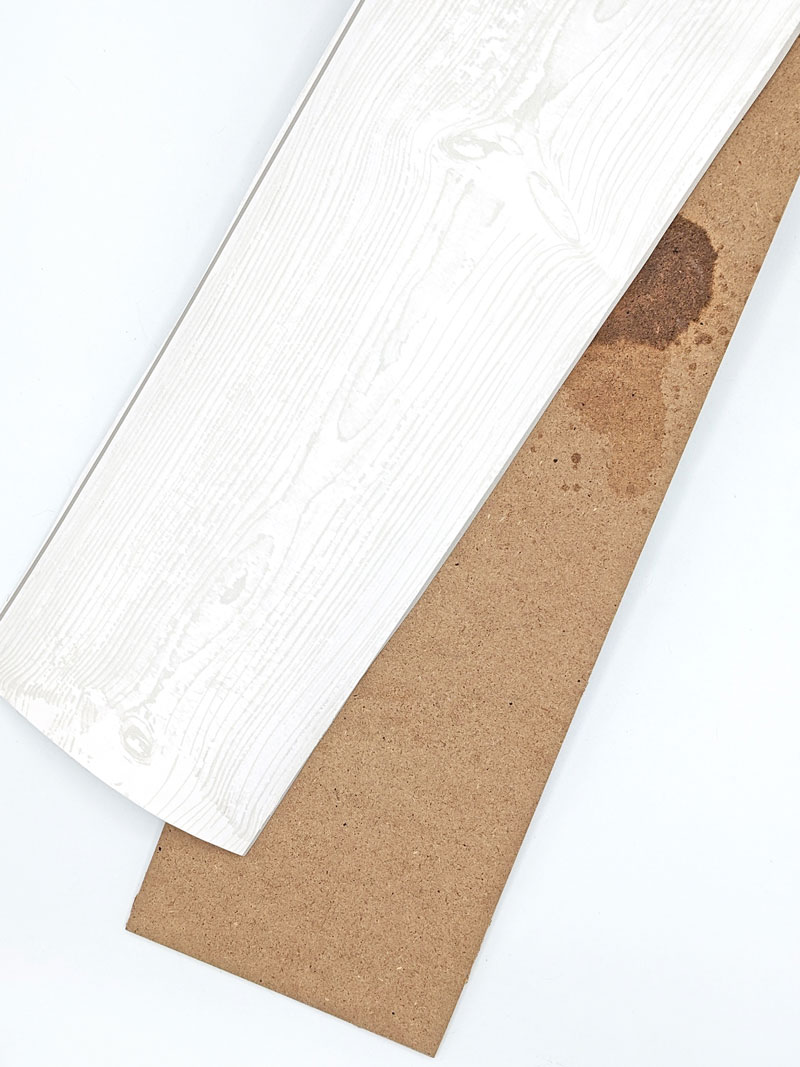 BINGO! Exactly the right size! I peeled the backing off and slapped it on my board so fast as if I was afraid that if I hesitated, something else would go awry! 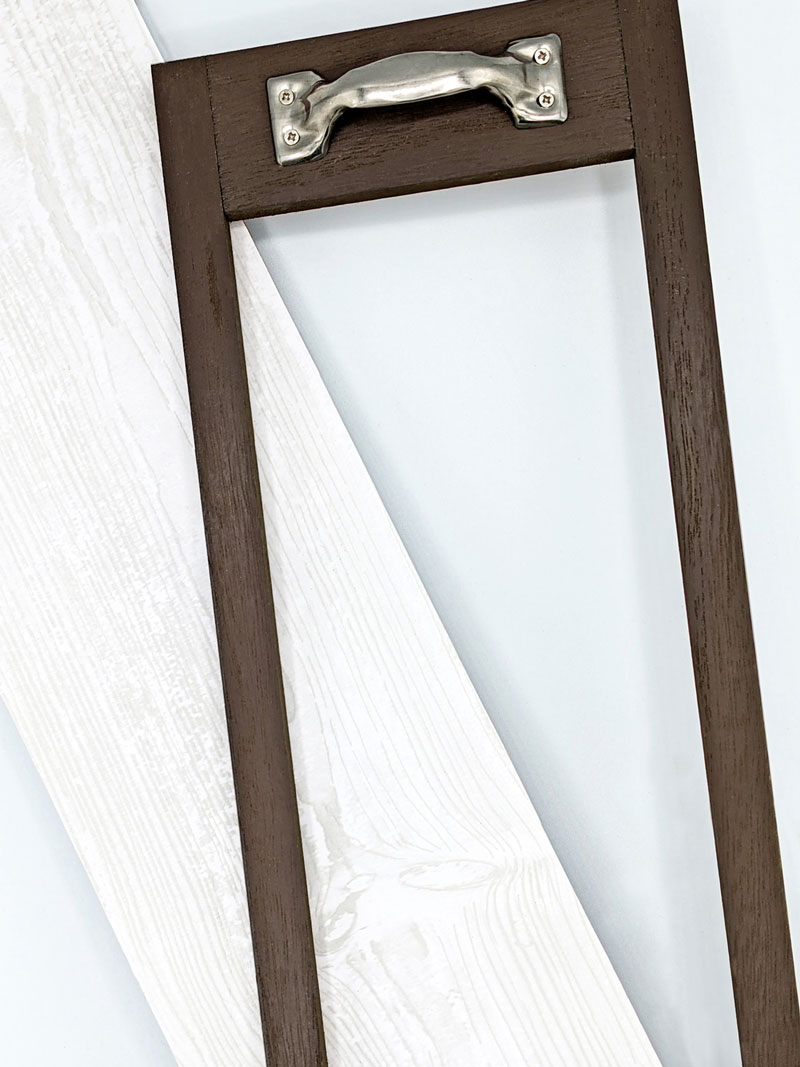 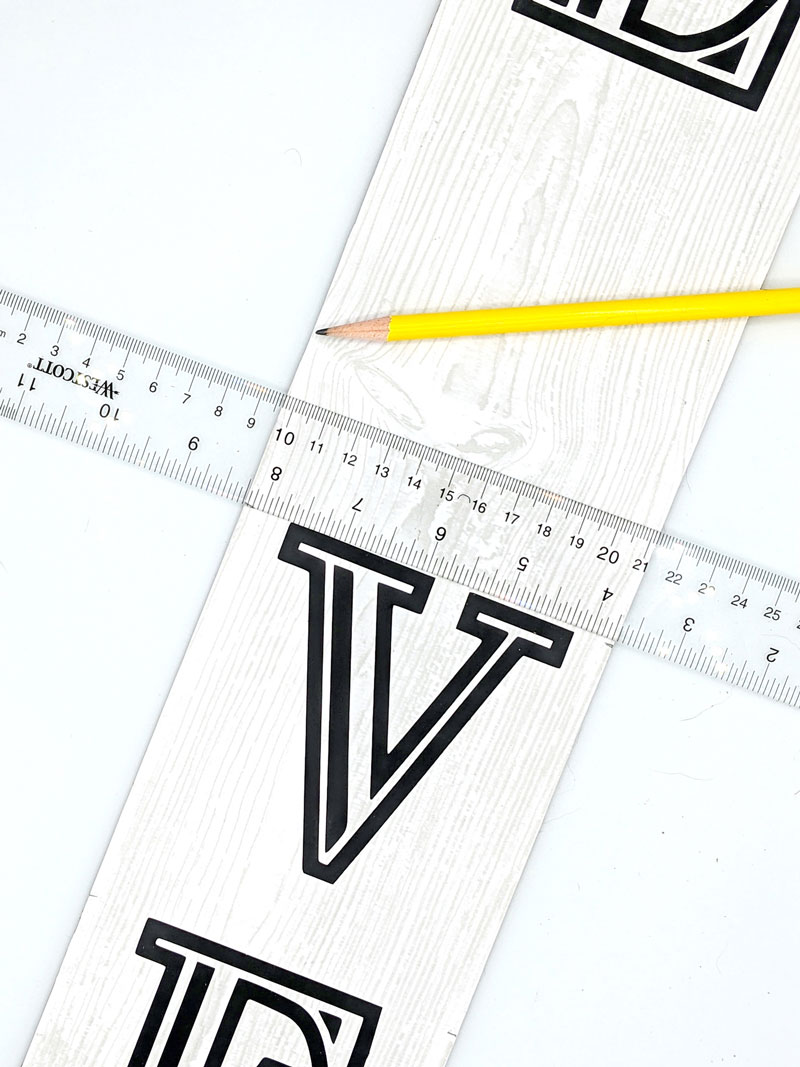 I found a similar font to the letters used on the front of the sign and made new letters cut from vinyl. 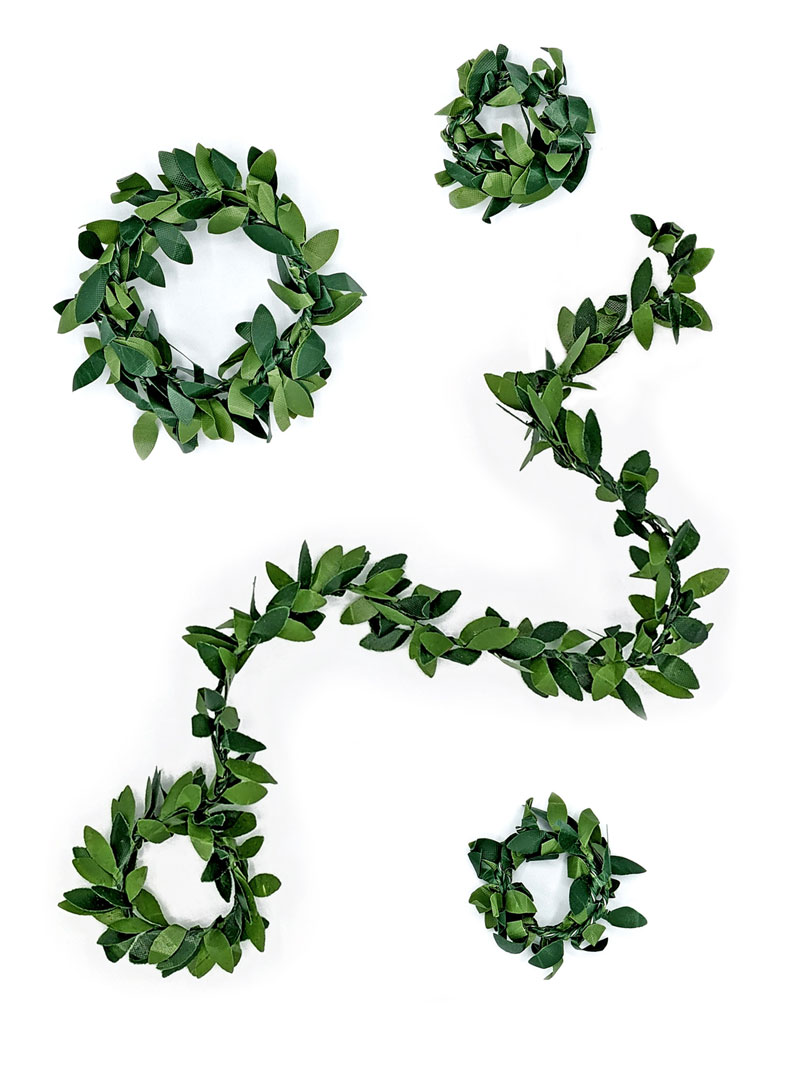 Using the leaf garland to make three different circles was definitely the easiest part of the entire project! They’re simply double looped and the wire ends tucked under so they don’t show. 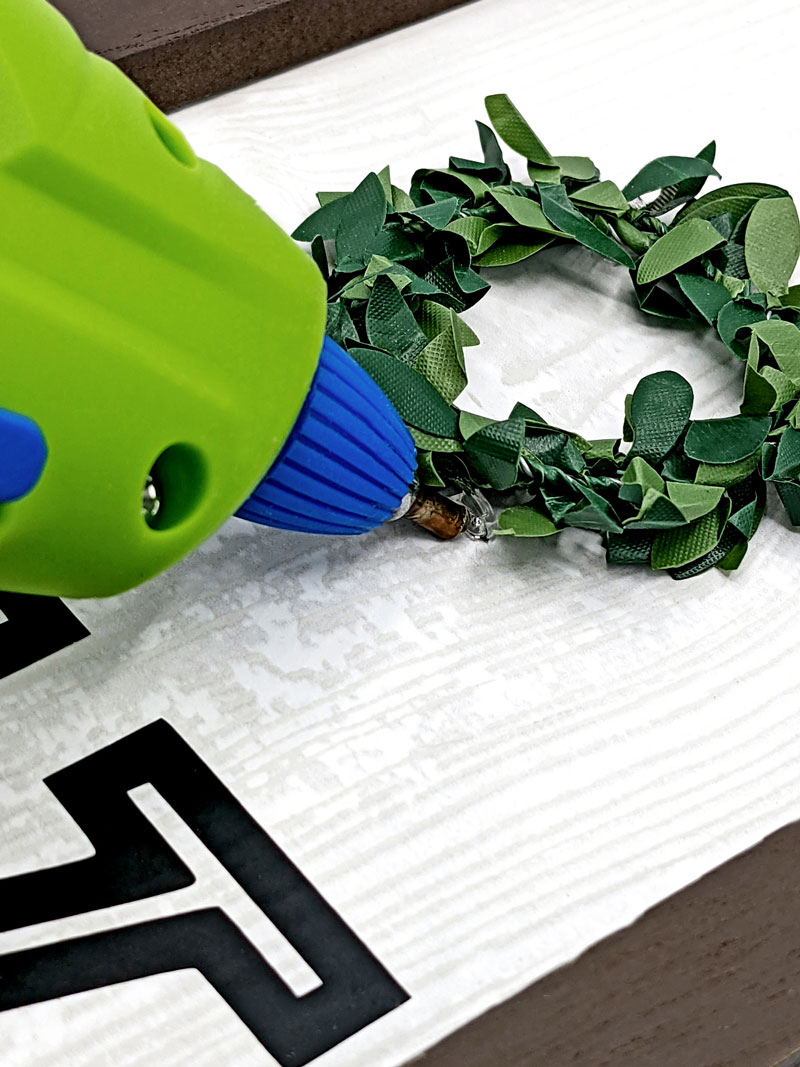 I carefully aligned and glued my new little wreaths onto the sign. 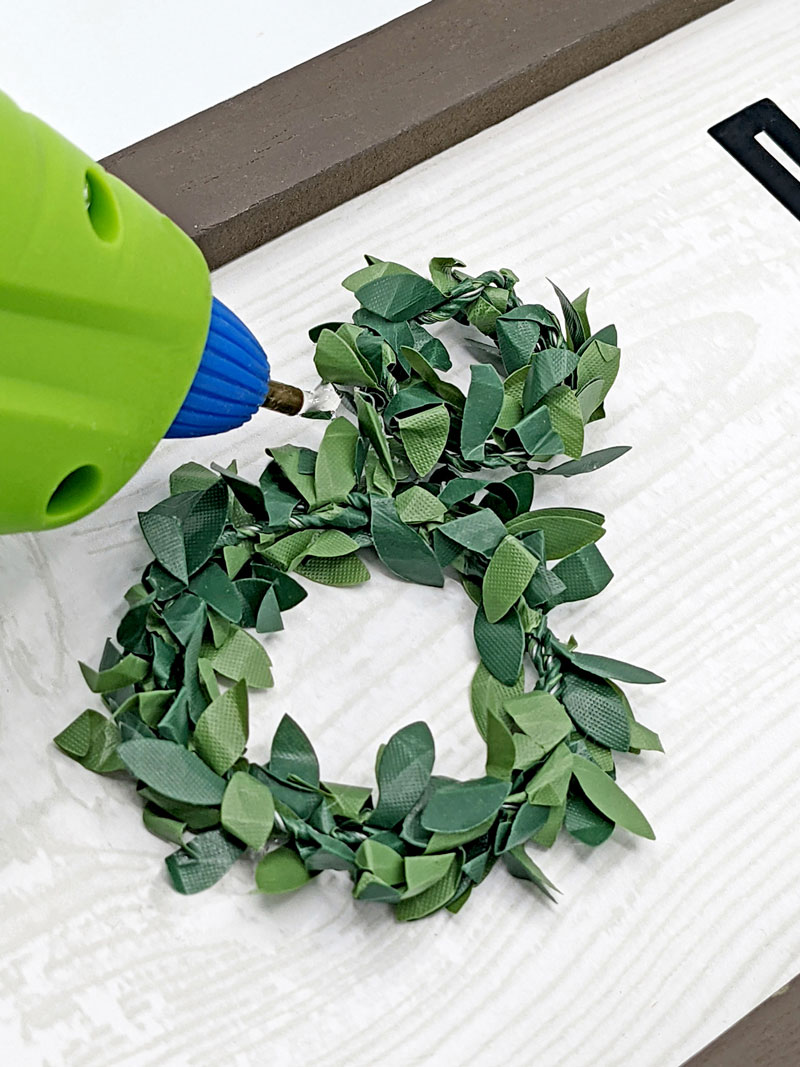 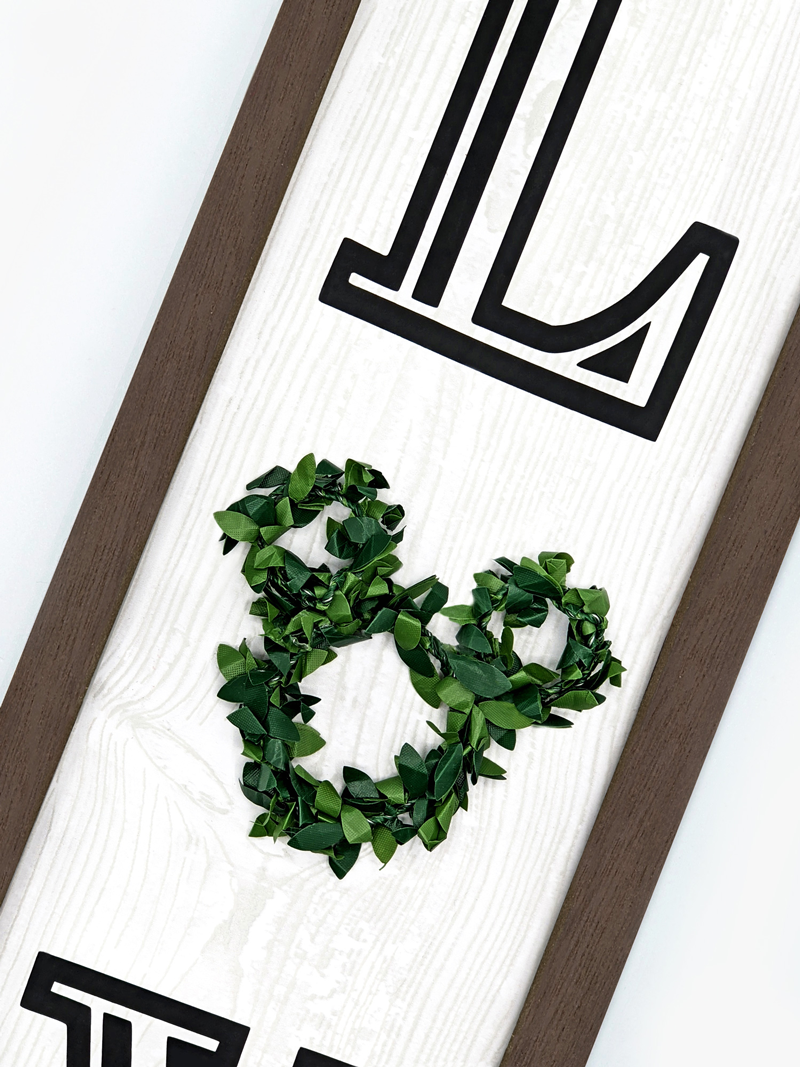 And just like that, my cute little Mickey wreath was done and attached to my sign. I didn’t even burn myself with the glue gun…this time! 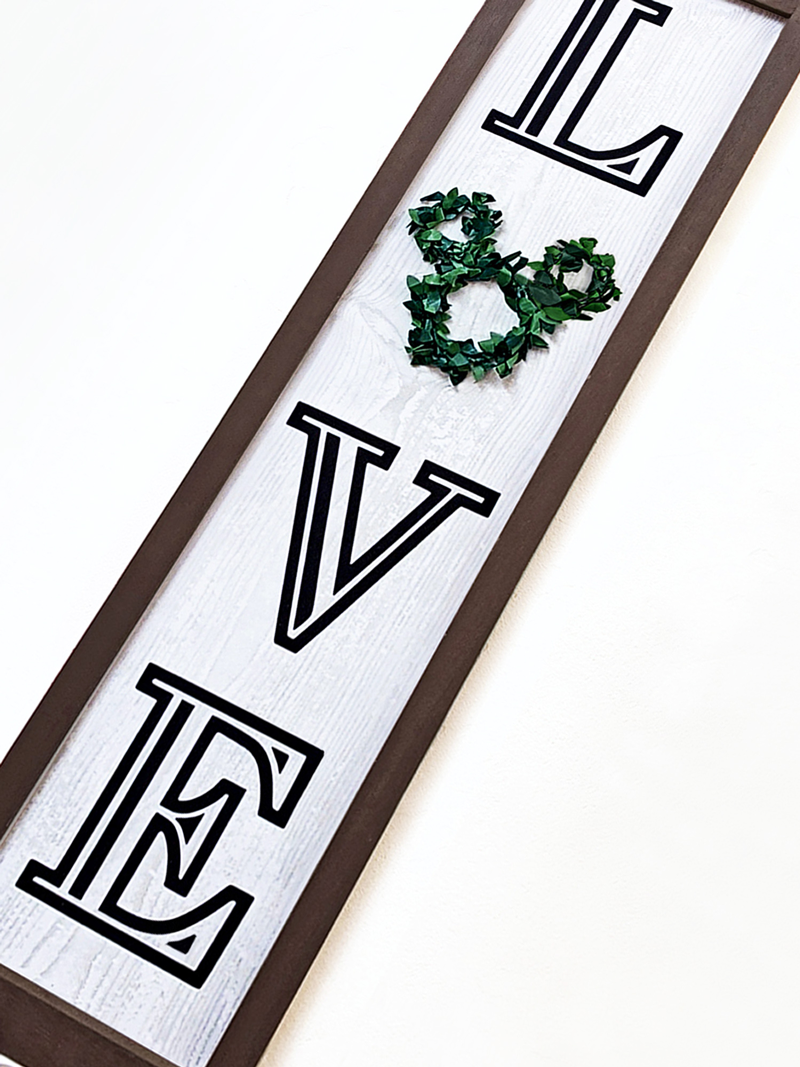 After completing this project, I thought about the lesson I had learned along the way and realized life is a lot like a DIY craft:

Sometimes things don’t go as planned. Sometimes our best intentions don’t work out and leave us with a mess. We may react in haste without knowing what we are dealing with and make it even worse! But if you decide not to give up and instead, take a step back and look at things you may not have noticed before that can help you, you can get back on track. And before you know it, you have created something beautiful that you can be proud of.

Have a magical day!

Nancy is the owner of Disney Creative Co. and Scraps & Ink Crafts. She visits Walt Disney World several times per year with family and friends where she finds endless inspiration for all her crafty endeavors. She's been known to run with scissors and colors outside the lines. Her favorite color is glitter.
Page load link